Just delivered another movement! This one uses the words Lulum (to sing) and Slulumchet (our song). Morna is hoping that the choir can rehearse in April or May and do a recording in June. Here’s hoping for a slight opening up…

Excited to announce that I am working with Elektra Women’s Choir on a set of new pieces. I have been trying on decolonizing my creative practice, so this project is a collaboration with various communities, including representatives of several First Nations in this area. I have been enjoying sessions with Morna Edmundson, Jeanette Gallant, Elder Nx’ketko and Rebecca Campbell. The focus of the project is women’s
role in water stewardship in indigenous cultures. Becky has been sharing some Skwxú7mesh words related to various concepts that have been introduced to us as we explore this important part of the natural world and Indigenous stewardship of the land.

I already have a good draft of a movement that is built around the word Kwisnaxwey (Birth).

Check out this “Conversation” about Decolonization: November 12 @ 7 pm EST — Can Western art music ever be equitable in practice and in perception? I’ll be speaking with Curator Parmela Attariwala, Ian Cusson, Lise Vaugeois, and Dinuk Wijeratne. Thank you Canadian New Music Network.

It has been a busy winter @ Winter Wind Records. 100,000 Lakes – my new album will be officially released on April 17, 2020… stay tuned for more news. I’ve released a lead single to give you a taste. Check out Ancestral Drones (featuring the amazing Ariel Carrabré) on Spotify and Apple Music. 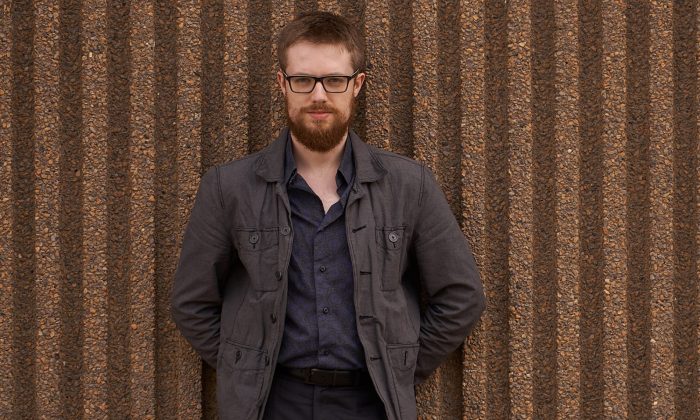 Check out some of my thoughts on decolonization and the School of Music.

It has been a crazy few months. I have been busy getting used to my new role as Director of the UBC School of Music. October was filled with performances of my music here at UBC, including the west coast premiere of my Symphony #1 “The War of Angels” (click the graphic to listen):

I have also been working on getting the new album ready. I am hoping to release Ancestral Drones, as a single from the album. This should happen in December, with the whole album dropping in late January.

Here is a short “making of” video for Ancestral Drones:

I am so very honoured and excited to take up the position of Director at the UBC School of Music. It will be sad to leave Brandon after almost 27 years, but the prospect of working with the outstanding faculty, staff and students at UBC is going to be a dream come true.

There will be lots of activities and projects before we leave at the end of June. The Eckhardt-Gramatte National Music Competition happens April 19-21 and recording sessions for a new album of chamber music (with support from Manitoba Film and Music) will happen in early June

I’m looking forward to the premiere of Orpheus (1) on Tuesday, March 19, 2019. Megumi Masaki will complete our Orpheus trilogy with this performance on the Brandon New Music Festival. The work features text by Margaret Atwood and is for piano, electronics and video.

On Tuesday, March 12th, the Brandon Chamber Players will perform my work 100,000 Lakes on the final program of their 20th anniversary season.

On Friday November 16th I’ll be in Montréal to hear 8 awesome young pianists play my piece “Eternal Earth” (from The Elements). It is the test piece for Category A in the OSM’s Manulife Competition. Here’s the first page: 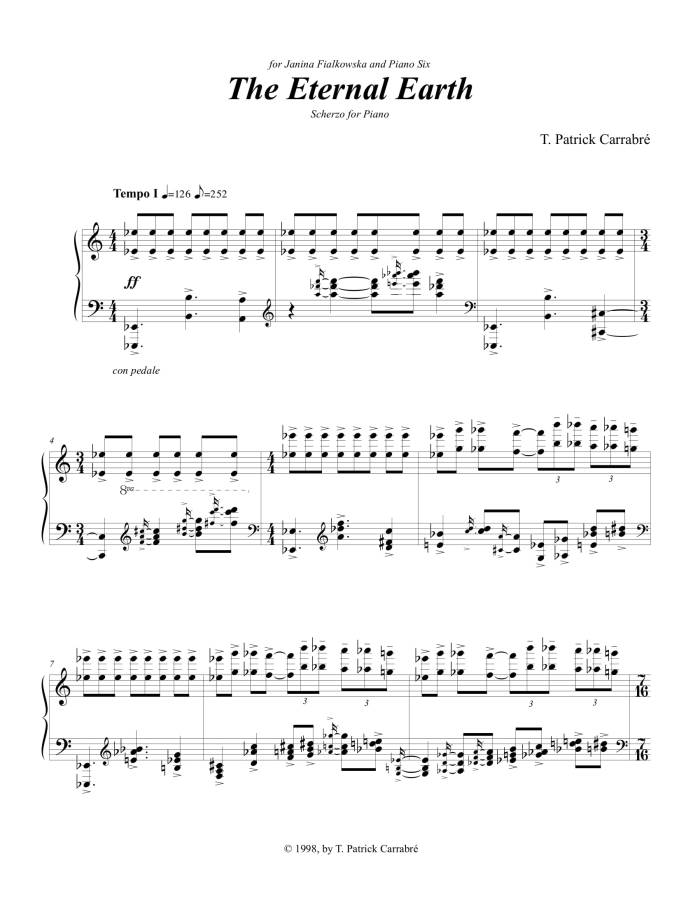 Excited for the Brandon University Concert Choir’s performance of my work Promised Land. The concert will take place on November 25th at 3:00 p.m.

“Orpheus Drones by T. Patrick Carrabré is an evanescent work in which the legendary Greek protagonist, musician, poet and prophet is served by the closest approximation of what might be described as divine music. The follow-up, Orpheus (2), is superbly related to death and descent – the politically motivated murder of Chilean singer Victor Jara becoming its principle contemporary metaphor via Margaret Atwood’s poem.”

Check out the entire review in the WholeNote.

Orpheus Drones can be heard on the Spotify Playlist Interplay: Classical with Electronics:

Orpheus Drones and Orpheus (2) are available for streaming now! The appear of Megumi Masaki’s new album: 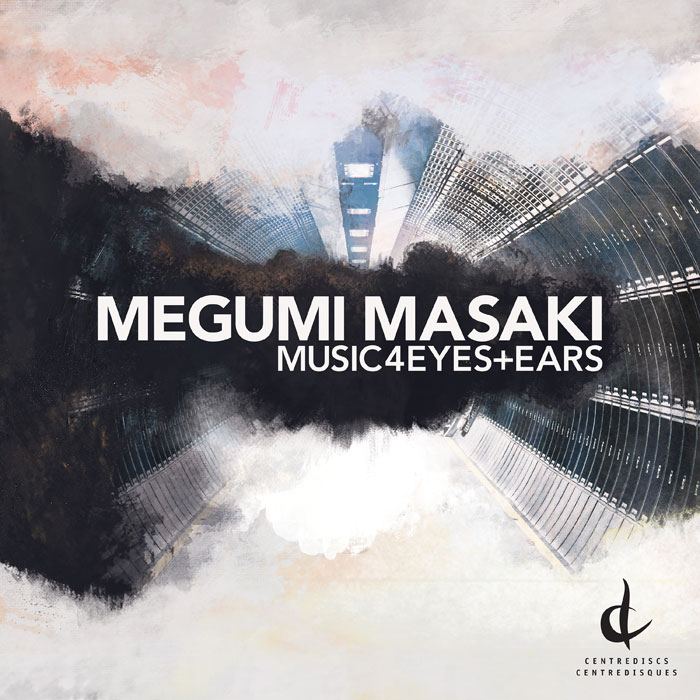 Crazy is officially available to order now… click on the cover! Happy to release a video from the new album – Crazy – available October 27!

This is the fourth song… Burnt

Pain (Audiation Remix) is now available for listening. Check it out on my Soundcloud page. Thanks to Braydon and Trevor for taking on this challenge. Enjoy!

The “trailer” for our Bell/MTS Stories From Home documentary is now available:

I’m excited to announce that the producer duo Audiation are getting ready to remix Pain, from my song cycle Crazy. Expect to start hearing it in mid-August!

The Stories From Home (Bell/MTS On Demand) documentary on Crazy should be available soon!

Scott Howarth and I have just finished mixing the song cycle Crazy for a new album and Meg Masaki’s recording of both Orpheus Drones and Orpheus (2) and also in the final stages of mixing. Both discs should be out in the fall of 2017. 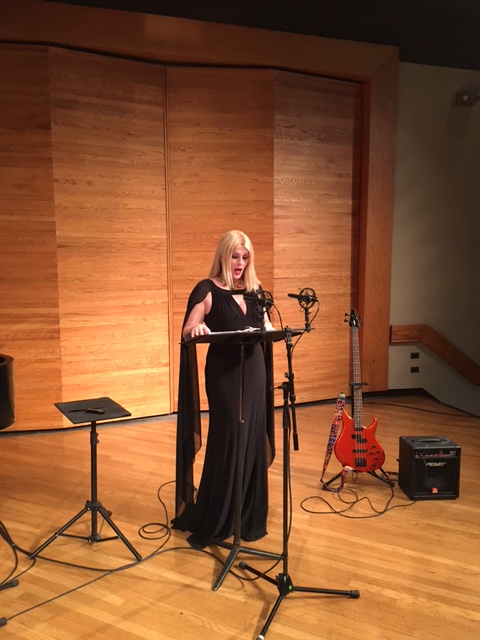 Naomi Forman during our recording session for Crazy.

The Toronto Symphony Orchestra has posted their performance of Inuit Games as part of the their Canada 150 website. The posting includes a full e-learning section with lessons plans and views of the different sections of the orchestra while they play.

Carissa Klopoushak and Philip Chiu have just released a fantastic new album, which includes my Chaconne 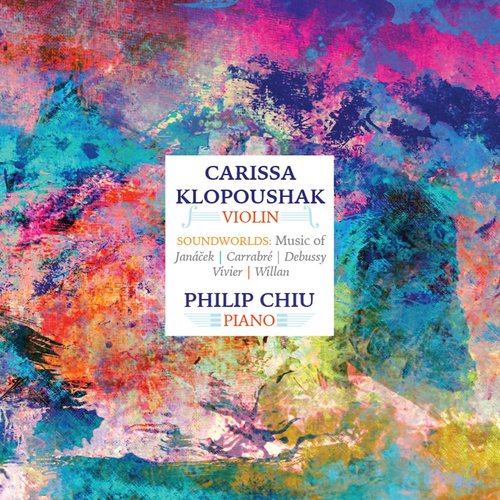